or …listen to Domina AURELIA guide you around her magnificent mansion !

The villa was built at the end of the first century B.C. and its integration into the natural environment was harmoniously  designed. The vaults facing the sea were used to contain the soil as well as blend in with the natural scenery. The terracing walls, with their alternating pattern of white and dark green, showed from a distance the importance and prestige of the residence. 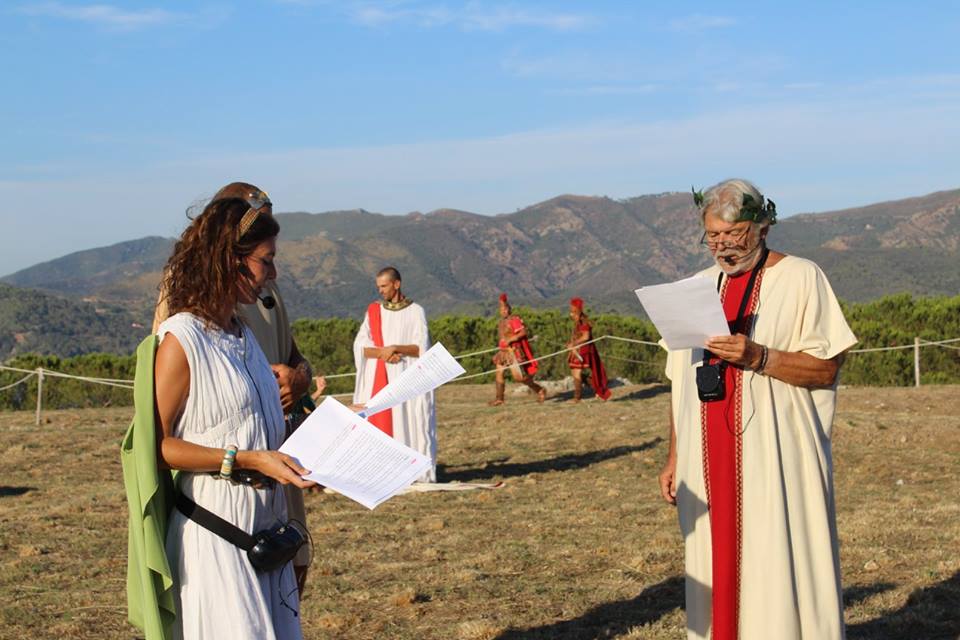 For those approaching from the sea, the vaults of the podium, on which the villa stands, resemble “caves” and this is how the villa acquired its name. 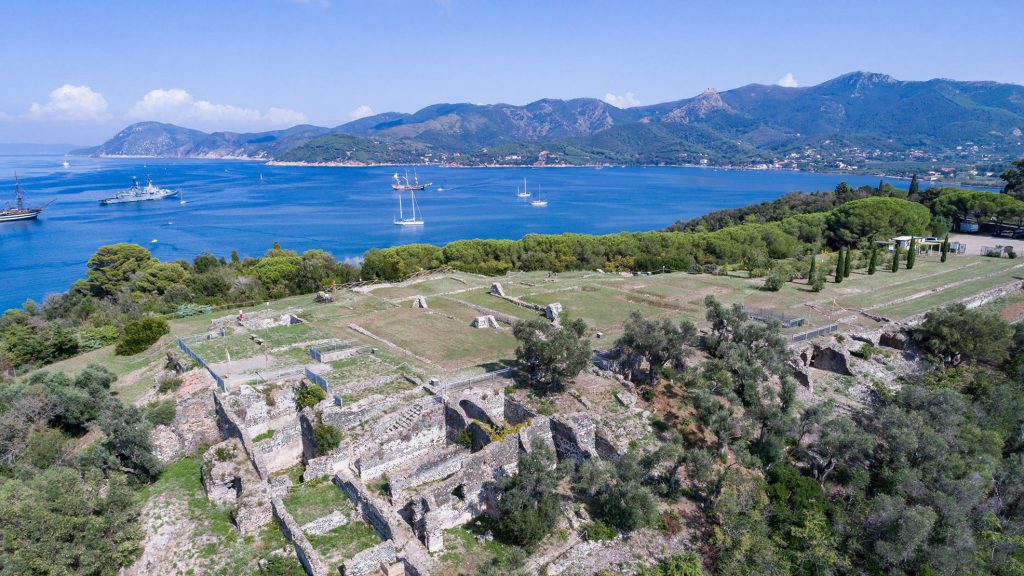 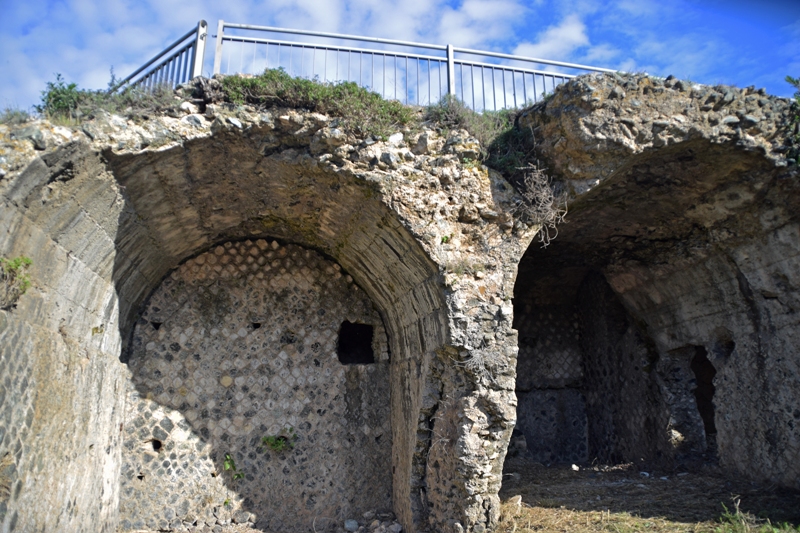 Because of its magnificent location and architecture, it is believed that the villa is one of many luxurious villae maritimae built throughout the Tuscan Archipelago islands and the Tyrrhenean coast by members of the Roman aristocracy as recreational palaces, away from the commitments and responsibilities of the Capital. 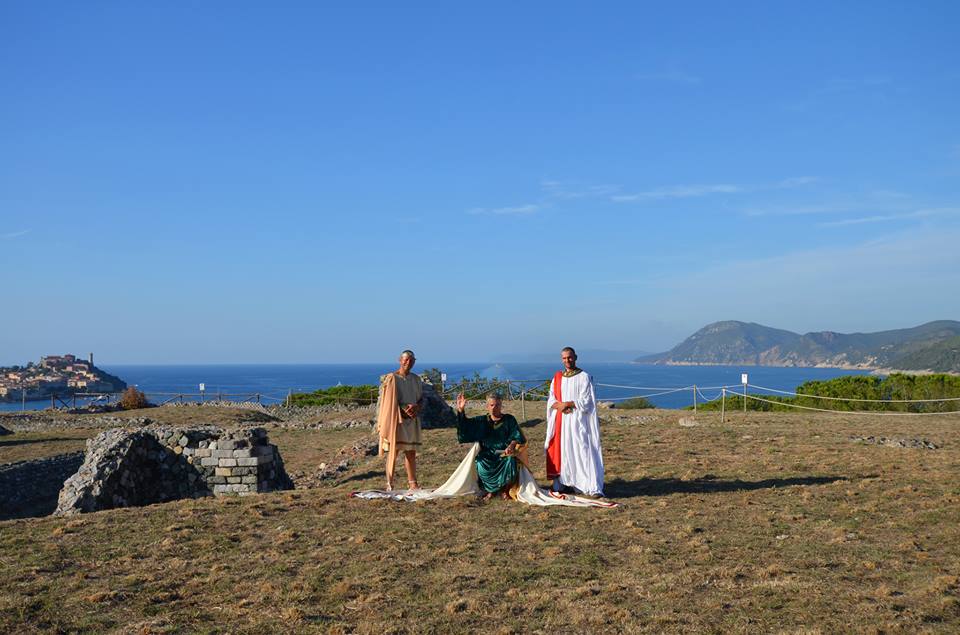 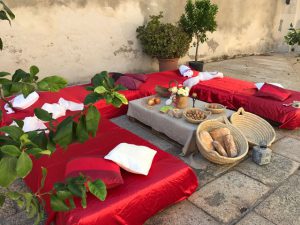 In the eighteenth century, the ruins of the villa attracted the interest of travellers and local historians. 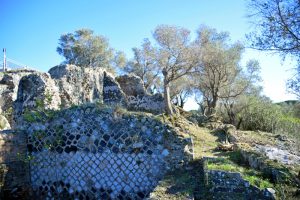 The Villa was originally so well constructed, the vaults and walls of the lower levels and upper residential floors were still intact at that time. Unfortunately, they have largely disappeared in the last two hundred years. 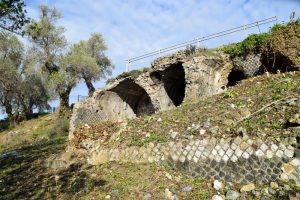 It is estimated that the villa was likely abandoned by the Romans at the end of the first century A.D. and from the fourth to the sixth century century A.D. the ruins were probably inhabited by hermit monks.

Between 1799 and 1802 Elba was a battleground between the French and troops faithful to the Grand Duke of Tuscany, supported by Elban insurgents and the British Navy. It was during this time that the outer walls of the villa were demolished in order to install a battery of siege cannons. 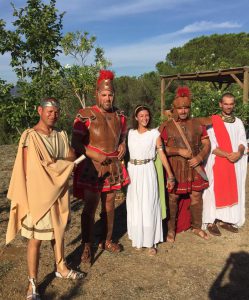 Artifacts found during excavations in the 1960’s are on display at the “Archaeological Museum of Linguella” in Portoferraio. 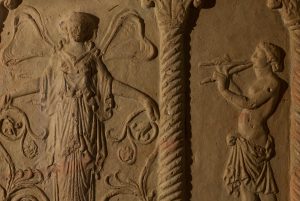 Among the items exhibited, is a terracotta slab that decorated the portico of the residential area, depicting Psyche between musicians playing the lyre and aulos. 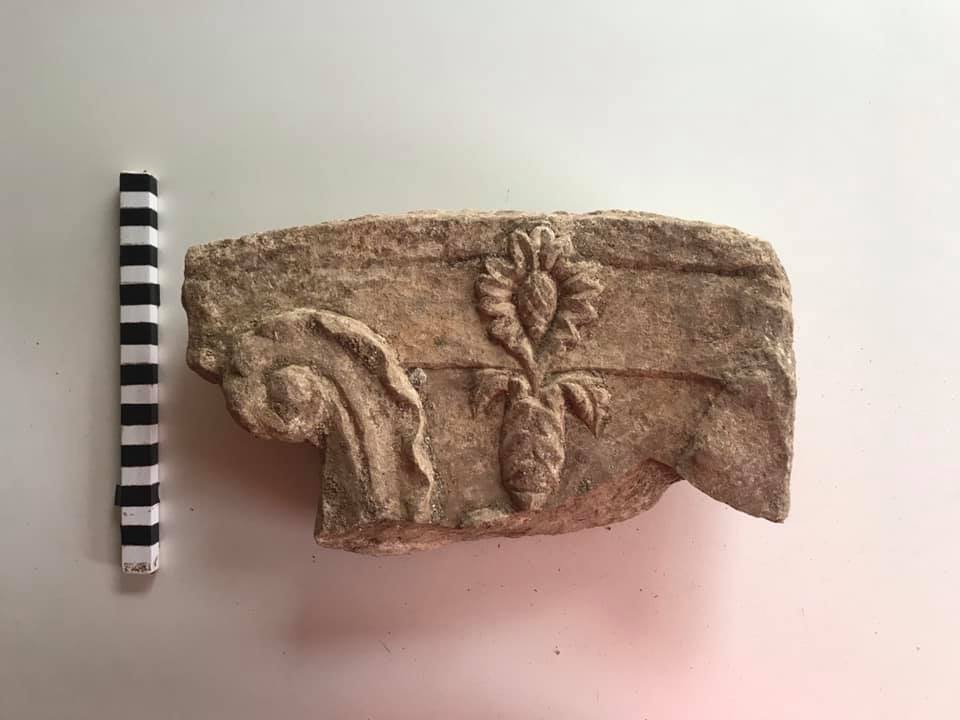 The Roman “Villa delle Grotte” is located at the top of the promontory overlooking the Gulf of Portoferraio. This distinguished position commands a spectacular view that includes all of Portoferraio harbour and stretches out to encompass the sea to the coast of Piombino.

Domina AURELIA will guide you around her magnificent mansion ! download the free app itzy travel

listen to our bilingual APP

During the first decades of the first century a.C. the owners of the villa added a commodity without which a large vacation residence was not complete: termal baths. Some spaces of the lower floor were renovated in order to obtain a complete baths circuit, reachable over a stair from the living areas. Recognizable are the calidarium hot air ducks  heated 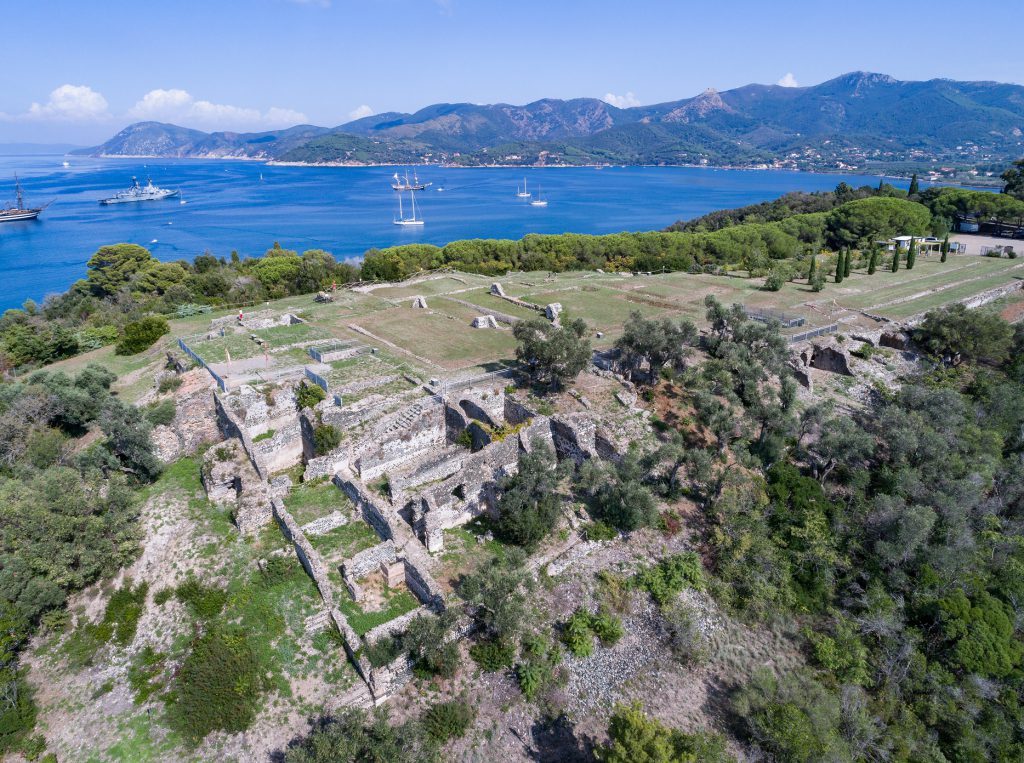 trought hollow spaces of the double pavement and used as sauna and hot baths, two adjoining rooms, probably a changing room, an  intermediate rest area, and the frigidarium with a small half circle shaped basin for the absolutions with cold water. Baths were build on the south-eastern corner of the villa, the sunniest during the afternoon hours, near the sunset.

THE GARDEN WITH PERISTYLE

In the center of the villa, around a large bassin, expanded a vaste garden, sourronded by a peristyle or collonade. The back walls of the peristyle were covered with paintings representing gardens, giving the illusion of a much larger area than it really was; the top of the colonnade supported 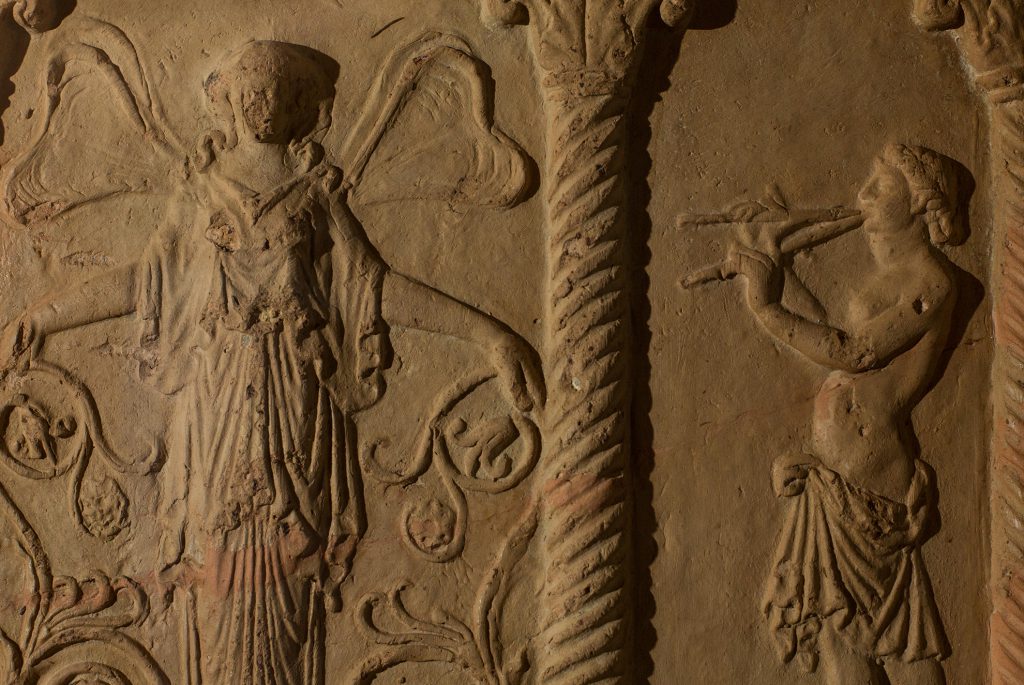 a terracotta frieze, representing in relief between two musicians a young girl with butterfly wings: Psyche.

Towards the North, the basin, through a long pipe, discharged its water into the lower gardens. At one end of the basin existed a large area facing the sea, a privileged panoramic point of the whole complex. On both sides of this area one can probably recognize the  dominus and the domina’s private quarters.

In the Villa delle Grotte, as in most of  Villas in the Vesuvian region, the open areas are larger and more important than the enclosed living areas. This explains the pleasure to spend t 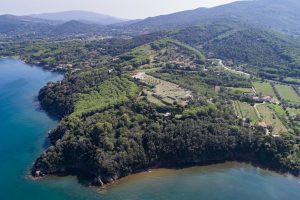 he time immersed in the nature of the wisely arranged gardens. It was particulary the large rectangular terrace, beside the living quarters, that was arranged as a garden. Gardens of this dimension included high trees throwing shade for fresh walks, flower-beds with myrtle, bay laurel, oleander, well arranged between statues, fontains and animals. A covered way was build beside the paths to allow the daily walks under all weather conditions. 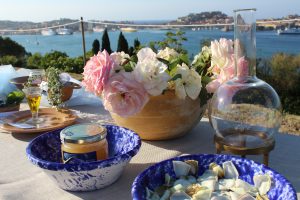 A powerfull wall, enforced and animated by semicircular niches, delimited a large terrace and was at the same time the monumental façade with which the villa presented itself to those arriving from the sea. This terrace also was a garden, with a small artificial canal probably carrying  water from the garden’s large basin, with the colonnade into a second basin  placed parallel to the straight part of the containment wall. 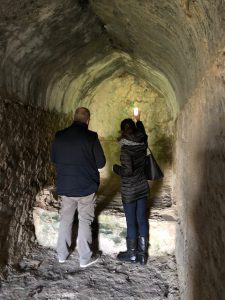 The Villa’s water supply was guaranteed by two large cisterns, the first one upstream and filled by a terracotta acqueduct with waters coming from Orello mountain. The second was installed in the lower floors on the western side of the complex. The cistern consists of three communicating pieces, thoroughly covered by a plaster of brick fragments and potsherd, able to render the inner walls waterproof. 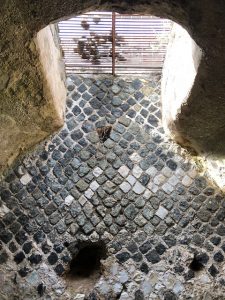 The central vault has a skylight, necessary for periodical cleaning and the maintenance. The stairs, on the contrary, were built during the 18th century in order to use the cistern as a deposit during the siege of Portoferraio, when an artillery position against Portoferraio was placed on the promontory.

The mostly used construction technique while building the villa was the opus reticolatum: the walls were realized using stones of a pyramidal shape, the square surface of these block can still be seen on the facades. The tips of this pyramidal blocks are in fact turned towards the side to have a better hold with the mortar. 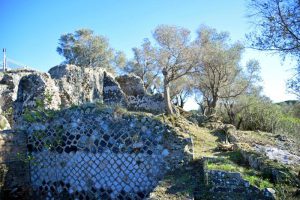 This technique needed expert workers to shape the blocks, but the building of the structures itself was much quicker. Such structures were then covered with plaster. Only the large external terrace walls were left without plaster and the various materials were used in such way as to create harmonious coloured effects. 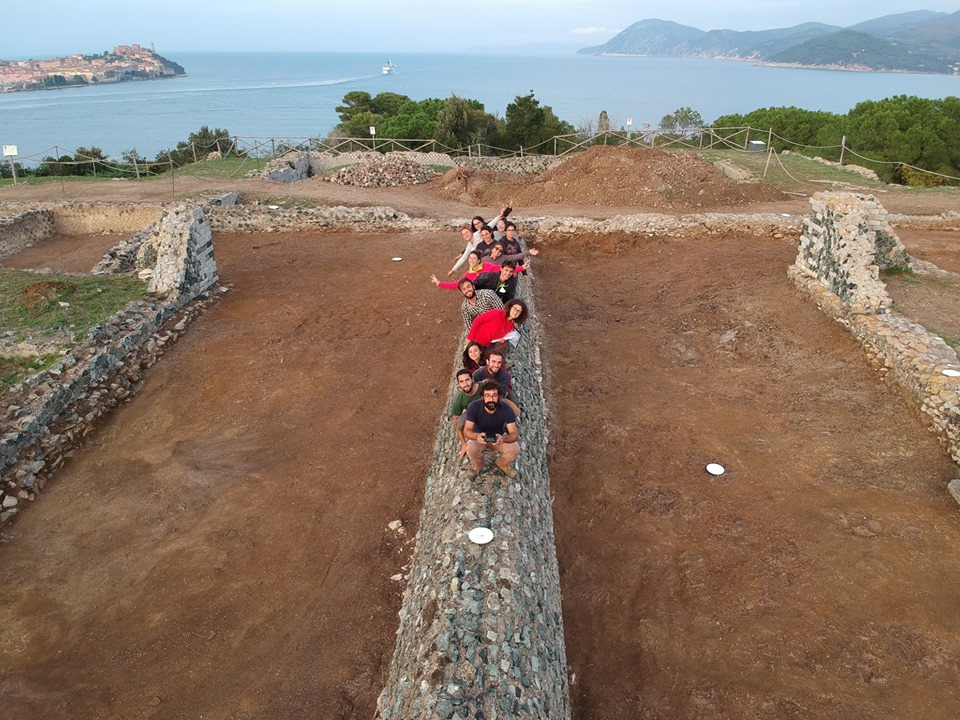